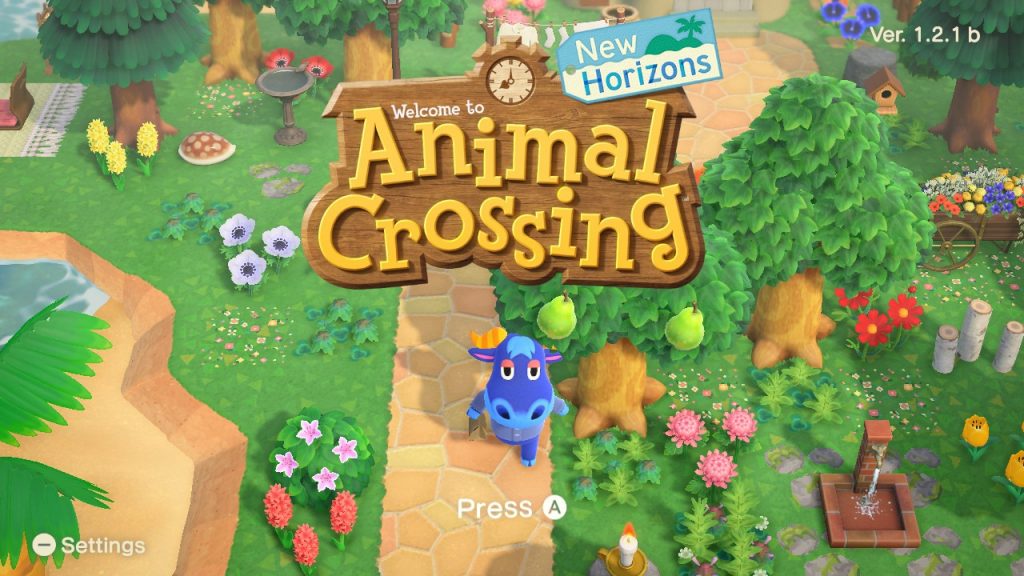 This week on the blog, I’m gonna talk about something a little different. Video games! Now, I’m probably what you would call a “casual gamer.” I love a good game of Mario Kart or Mario Party. I got pretty obsessed with Left 4 Dead for a while, even though I’m really bad at aiming when I shoot and probably end up shooting my teammates more than the zombies. But usually my reaction to being invited to play video games is more of a grunting, “ugh” noise with a side of, “do I have to?” and less of a “whoopee” kind of vibe. Or whatever gamers say to express pleasure and excitement.

So when my game developer husband (the CCO of Clever Endeavour Games, makers of Ultimate Chicken Horse, in case you’re wondering) bought Animal Crossing: New Horizons just because he thought I would like it (not so he could play it himself), I was skeptical. So skeptical that I named myself AND MY ISLAND “bluebear” without even putting in the effort to use capital letters. Bluebear is the name of Kyler’s childhood teddy bear, and my go-to username if I can’t or don’t want to put effort into thinking of a good one. Also I think I put my birthday as January 1st ’cause re: I was saying, “uuuuggggghhhh” and rolling my eyes dramatically the whole time.

Now, I don’t know if literally being stuck at home every day affected how much I enjoyed this magical little game, but I have basically been obsessed with it for the past two months. I’ve been playing every single day, I’ve subscribed to the Animal Crossing subreddit for the inside LOLs and inspo, and my YouTube feed is basically filled with Animal Crossing streams/island tours, interspersed with gardening content.

For those of you who aren’t interested in my wall of text analyzing the game, my island/house tour video is at the bottom of the post.

I’ve thought a lot about why I like this game so much. Is it the cute characters? The sweet outfits you would never wear in real life? While Sprinkle and fairy dresses do indeed fill my heart with joy, I don’t think that’s it.

I think to a lot of people, Animal Crossing is a kid’s game, and it can be depending on how you play it. But to me, it’s a design game. It’s basically an interior/exterior design and decorating game. I suddenly got a brand new house that I could decorate however I wanted, with an entire island as my backyard. I think I’m obsessed with Animal Crossing because designing my virtual house and my island gives me the same pleasure as designing and decorating my house and garden in real life. Except it’s way cooler in Animal Crossing!

First of all, you get a whole island to play with, plus a huge-ass home. You can create cliffs and lakes with the press of a button, you can move houses, uproot fully grown trees, change your roof and siding every single day if you want…the possibilities are what my wildest landscaping and renovating dreams are made of.

Second of all, you get to decorate with awesome items I would never be able to find/afford in real life. I have a grand piano in my house. The conservatory I’ve always wanted. Street organs, cute wells, and garden wagons filled with flowers that never die, are everywhere on my island. I have a frickin’ teacup ride and a hedge maze, for Nook’s sake!

When I started thinking about why I like this game so much, it became really clear how easily I applied the same design principles I use in real life and my personal aesthetic to the island. I was thinking colour palettes, rule of thirds, balancing brights with neutrals…I really wanted to make every corner of my island a feast for the eyes with little vignettes everywhere. Just like how I approach designing my house and garden in real life.

And if that weren’t already fun enough, the cute villagers actually interacting with the cute stuff on the island, the wholesome, sweet interactions between players, plus the fact that you don’t have to work or pay taxes or do any kind of real life stuff in the game, is just the icing on the cake.

Kyler often gets excited about showing me new video games, but I have never let one completely take over my life like Animal Crossing has. He could not have been more right about how much I would love it. But with that being said, I do feel like my island is more or less “complete” now and I find myself being less interested in playing these days.

So I filmed a little island and house tour, mainly for myself, but in case you are an Animal Crossing fan and are curious about how I designed my island, being such a design and decor fanatic, here it is! By the way, I did not get up at 5AM to film this, I time travelled to 5AM because it has my favourite music. And the video turned out to be a little ASMR-y, ’cause I guess I was talking pretty quietly. Sorry if you can’t hear me.

If you want to visit Bluebear Island and hang out with virtual me, you can send me a DM on Instagram or any of the real life ways you can contact me if you know me in real life! And yeah, I did not know there’s an actual blue bear named “Bluebear” in Animal Crossing. I had no idea what this game was and did not take it seriously while I was setting up my island, okay???