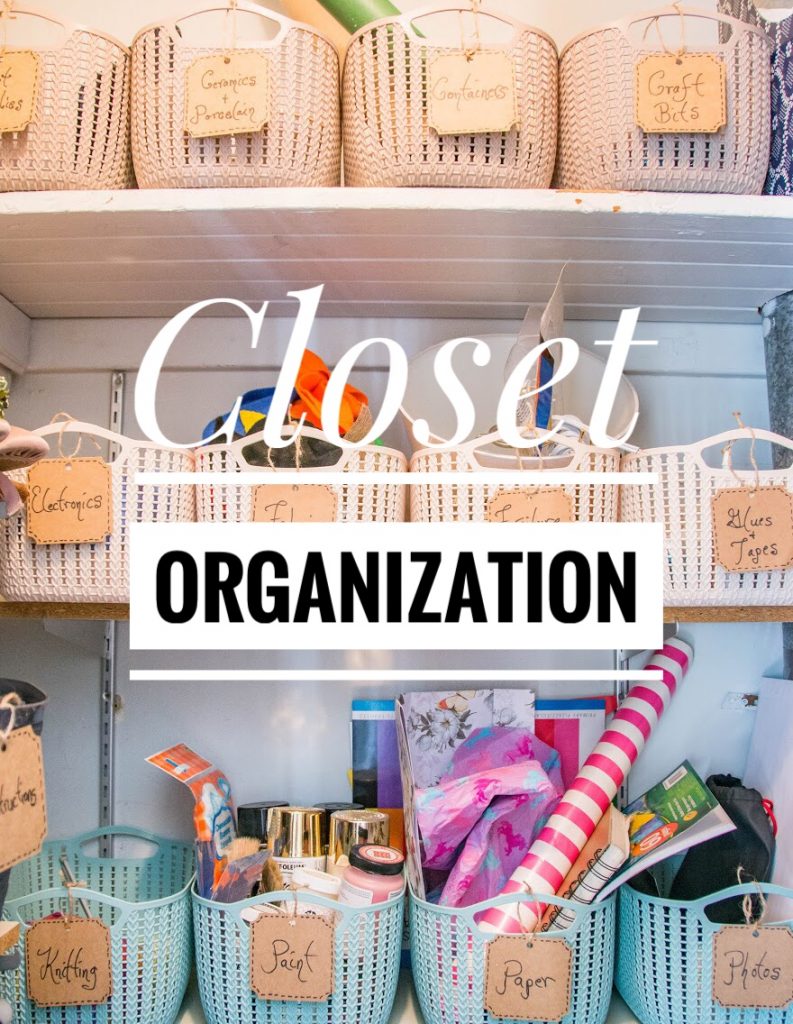 As an avid DIYer, interior decorator and home renovator, you can imagine how many bits and bobs, odds and ends, and random doohickies I’ve been collecting. And I’ve just been shoving it all into my office closet for the past two years. I thought about cleaning/organizing my closet once or twice, but I would just take one look at it all and shudder while slowly backing away.

Granted, I don’t think my closet is the worst there ever was, but if you know me and how organized I normally am, this is a level of chaos I normally would not abide. I mean, I put my spices in alphabetical order, for God’s sake! It was finally time to do something about my mess of a closet. I mean, why do I even have a tiny Christmas tree in there???

I started by emptying the closet and laying it all out on the floor. I almost ran out of floor space, I had so much stuff! I found things I completely forgot I had. Curtain rod finials, earring hooks from 15 years ago when I was really into making earrings, an old fountain pen and ink jar from when I was really into dipping my pen in ink to write, cheese cloth, floral tape….And. So. Much. Ribbon. Why do I have so much ribbon?

Now, this was not going to be a decluttering/clearing out of useless stuff. Normally, I ruthlessly declutter my stuff because again, I cannot abide mess and disorganization. But as a crafty kind of person who’s always doing little projects and changing up the look of my house, I actually do feel like I need to keep all this stuff. I might have 2000 feet of ribbon, but someday, I might have to make an armchair of ribbon. Or something.

More importantly, it’s not that I was running out of room in the closet or anything. It was literally that everything was just everywhere, and if I wanted to make my ribbon armchair, I would’ve had to go through everything in order to find all the ribbon. I just needed to organize it all into easy-to-find categories. You may have noticed in my before photos that right when we moved in, I had attempted to have some kind of organization system with a meagre four boxes in categories like “Crafts.” Oh, what a sweet summer child I was.

After laying out all my stuff, I wrote down the most prevalent groups of stuff and ended up with almost 20 different categories. I tried to be as specific as I could in a way that would make sense to my own brain in 5 years when I would need all that ribbon for my ribbon armchair. I think that’s important. Organization can mean different things to different people. You have to organize in a way that makes sense to you!

I had to make two trips to two different dollar stores to find enough bins. I think I would have preferred to have all the bins the same colour/style (it helps with keeping it all looking organized) but I would have had to hit up probably six or seven different Dollaramas to even have a shot at getting so many that were all the same.

I then stuck labels on the fronts of all the bins, but quickly realized, that wasn’t going to work. They weren’t sticky enough to adhere to the bins and kept falling off. So I went back to my tried and true method of using cardboard labels tied to the bins with string. I gussied up the plain label design by drawing on some stitching around the boarders with Sharpie.

I’m pretty happy with how it turned out. I do feel like the clutter has been minimized and everything is way more organized now. I think if I ever need to find some obscure bit of crafting goods, I will know where to find it for sure!

What do you think of my new and improved office closet?