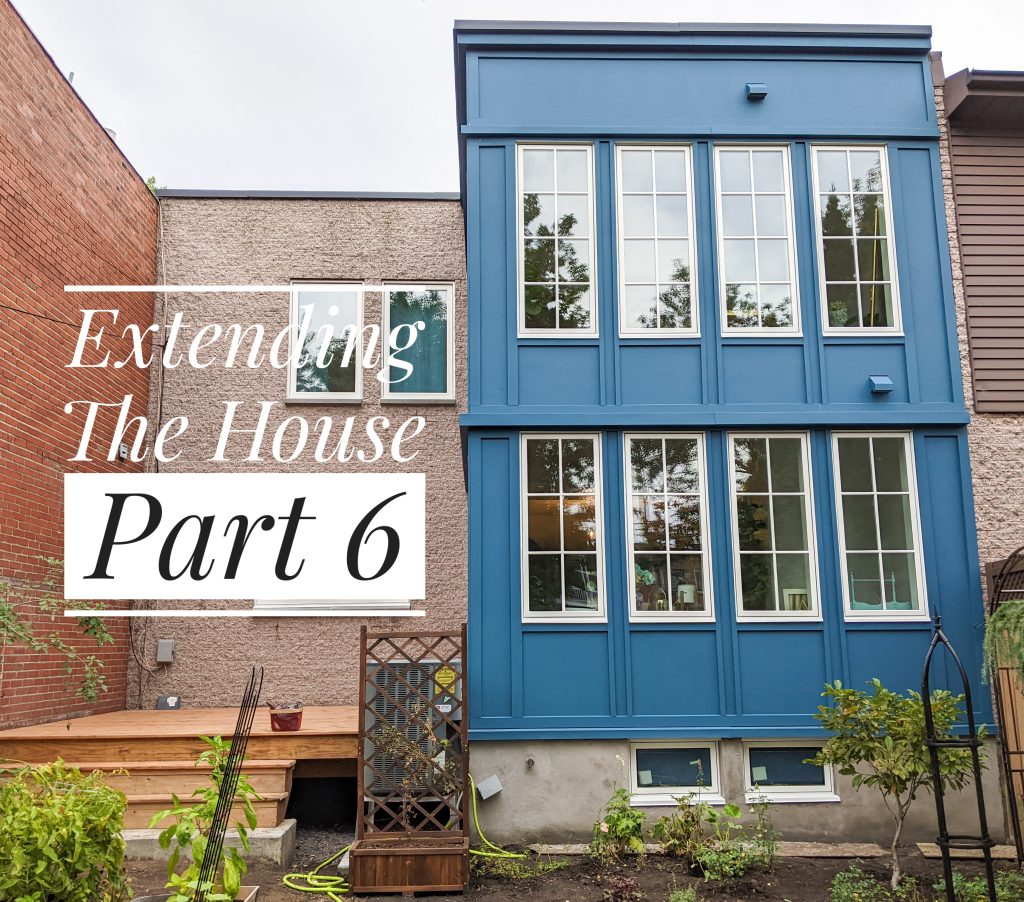 Well, I had a baby in July and got kinda busy, but I’m back now with what you’ve all been waiting for: progress on the extension!

When we last left off, the location of our Home Depot flooring was as mysterious to us, Home Depot customer service, and the delivery company as whatever happened to Amelia Earhart. But the baby’s arrival was imminent, and we could no longer have my random office stuff clogging up the hallway, our bedroom and the baby’s room!

We decided to just forget the Home Depot flooring and go to the good ol’ Roi du Plancher (translates to King of Flooring) to just buy whatever they happened to have in stock. This place was basically a warehouse with pallets of random hardwood everywhere, and four or five employees who all looked like bald, middle-aged body builders. Definitely where you wanna go for your last-minute hardwood needs! I sound sarcastic, but we ended up finding a pretty nice, rustic, oaky-looking option and took it home the same day.

Once the flooring was installed in the office, we could finally just dump all the furniture and random office stuff in there, although the rest of the office wasn’t finished yet. We were able to free up a ton of floor space on the 2nd floor!

And whatever happened to the Home Depot flooring, you ask? Well, one day after the Roi du Plancher flooring was installed, a random pallet of Home Depot flooring just showed up at the bottom of our front steps. The delivery company didn’t even ring the doorbell to tell us! We just opened the door to throw out a dirty diaper and saw it sitting there.

At least we had no problems returning it for a refund. Again, I emphasize, if you need wood of any kind for projects and renos, order it, like, six months in advance!!!

Meanwhile, the framing of the downstairs portion of the extension was coming along! The powder room was constructed, and everything was getting insulated and drywalled.

One thing I really wanted to do before they closed up the walls was hide something in there for our house’s future homeowners to find! My original idea was to hide a fake skull so they’d have a half-second heart attack before realizing it was just a joke (my fake skull budget is not very big!) but it was too big to fit in the walls.

So I settled for a little time capsule of our random stuff instead.

I’m not gonna tell you what’s in it, that’s for the future homeowners to find out and have fun with!

I also wrote a little note on some of the sunroom studs. But I actually wonder if the Sharpie I used will last. I should’ve researched what to use for writing inside walls with before I did it!

By this point, things began moving quite fast!

The subfloor was installed, then the cables for the heated floor, then the tile.

It’s funny, I originally wanted a parquet hardwood floor for the sunroom and Kyler wanted tile, and then we found this tile that looks like parquet hardwood! I think it’s turned out quite well.

The window finishing and baseboards were also completed shortly after this.

And the last window in the office was installed!

Speaking of the windows, when they cut out the Tyvek, it was a pretty magical reveal. The impact of lighting and the whole effect of the sunroom was really apparent!

My office door finally got installed.

We put up some wallpaper for a feature wall in the powder room.

The toilet and sink were installed shortly after, and all the light fixtures were put up!

We could really begin living in the new spaces, although there was still more to do before they could be considered “finished.” It’s been so nice to have the extra square footage!

When it came to the exterior, it was all about that architectural detailing. It was kind of like putting together a puzzle. A lot of pieces were involved!

This whole project was a kind of an exercise in scaling back my grandiose vision to a more realistic standard in terms of cost, time, effort and cohesiveness with the rest of the existing house. While I would have loved those custom transom windows and more detailed mouldings on the exterior finish, simpler was really the right call for maintaining a look that could work with the original house.

I had to keep reminding myself, we were going for more “vintage cottage” and less “grand manor estate.” I’m not trying to pull out the monocles and top hats over here!

Anyway, what do you think about the colour we chose? I love it! I think it not only is a great shade in and of itself, but it’s really the only colour that could actually work in harmony with the weird pale, greyish pink of the existing brick.

The deck was also installed around this time and it’s been nice, sitting out there with the kids for last few summer evenings of the year.

Overall, this has been a really crazy past few months! We added a new baby to the family, got so much more square footage of living space and a ground floor toilet. Oh, the glorious ground floor toilet! The extension was worth the hassle just for that.

But seriously, I can’t believe it’s been almost 6 months of work and it’s almost finished. We just need to get railings put onto the deck, some deck lighting installed, and a couple of finishing touches completed in the powder room! It’s been quite an experience being super pregnant, giving birth and having a newborn, all while walls were coming down and going up in our house.

But the before and after is truly remarkable!

Next comes the fun part of this renovation, for me at least! Putting together the interiors of each new room we’ve gained! You’ve seen a sneak peek of all the lighting fixtures and flooring we ended up going with, but it might take me a few months to decide on, and source all the furniture pieces and finishing touches necessary to really complete each space.

And of course, when they are finished, you’ll be the first to know! Can’t wait!

Bright And Sunny Nursery
Front Yard Landscaping Part 1: When Plans Have To Change
Extending The House Part 5: Windows, and Roofing, and Busting Through Walls, Oh my!