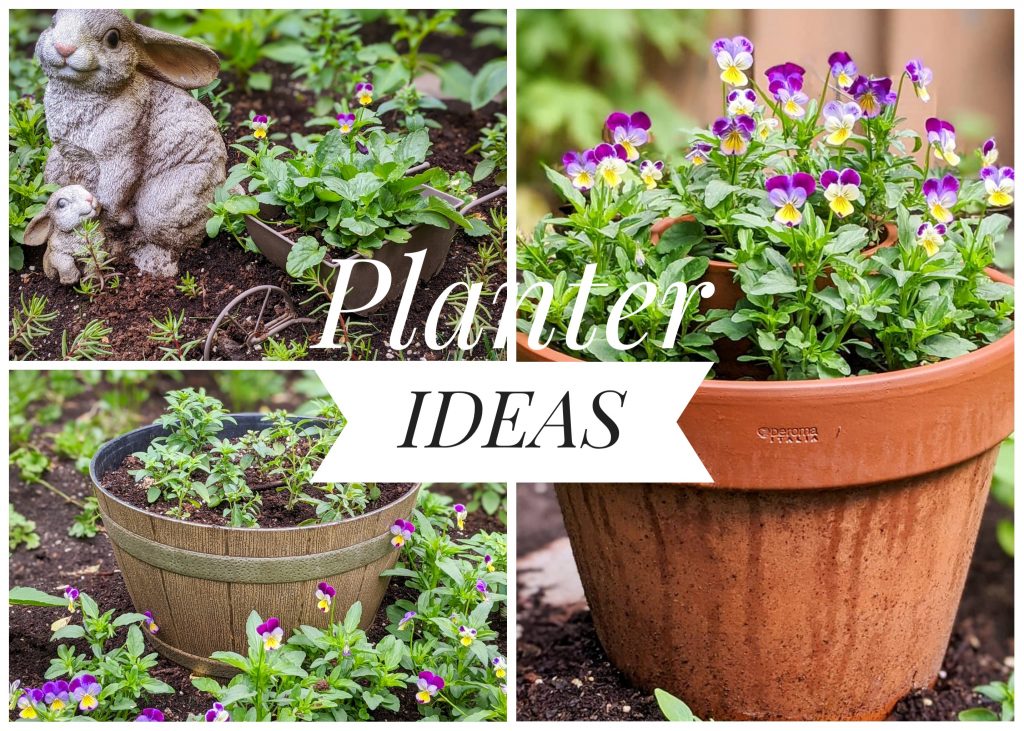 Guys, I think I’m officially a gardenhead. Gardeninghead? What do gardening enthusiasts call themselves? I have so much to learn!

Now, as we all know, there’s been a pandemic going on in the world and Montreal, like much of the world, has been on strict lockdown for a few months now. I had ordered flower seeds online in February, and was making many gardening plans that very much involved my annual spring trips to various gardening centres.

Well, those trips didn’t happen. So instead, I made due with what I had around the house and in our little backyard shed. Turns out, it was a lot to work with!

One of my projects involved finding cuter ways to display my potted flowers. I ended up using all of these planters as part of my garden bed itself, but you could easily use them as porch or deck decor, balcony planters, or even indoor plant holders if you want! If you’re looking for ways to liven up your flower display game this spring/summer, here are five super cute planter ideas for you to try!

I wanted to make a three-tiered planter, but I only had two sizes of terracotta pots that would work together. Depending on where you want to put your planter, three tiers might actually be too much. I put the two-tiered planter in the middle of my border garden bed and I think three tiers might have covered too much of what’s in the back of the bed.

I actually love the way the two-tiered planter turned out! I ended up putting pansies/violas in my tiered planter, but you could create a really nice cascading effect with hanging or trailing flowers, almost like a flower fountain!

What I mean by “ornamental” planters is basically pots or pot holders that you might find in the garden centre that look like something else, but can totally be used in your garden or around your deck, just as decor. I mean, how cute would this little wheelbarrow and bike look, just sitting by your front door?

Now, obviously, these little ornamental garden planters aren’t gonna be just lying around in everyone’s case, but they happen to be part of my outdoor stash. I picked them up last year at the dollar store if you can believe it! I mean, I kind of can. The bike has started to rust. You get what you pay for.

But I still think they are super cute and fun! The little miniature bike holds a pot in the back while the wheelbarrow is its own planter. If you’re ever using an ornamental pot or something that’s not meant to be a planter as a planter, be sure to drill holes at the bottom so the water can drain out.

What I mean by “fun” pots is basically anything that was designed to be a planter or hold plants, but there’s something extra cute about it. Like this one I got a couple of autumns ago to hold chrysanthemums that looks like a wooden barrel, but is totally a regular plastic pot. Sure, you could just use a regular flower pot, but why not an old-timey barrel-looking one?

I would almost group this category in with the “ornamental” planter category, but I would say this category is more for things that were never intended to be flower pots. I had this metal watering can that I actually did not like very much. Despite all the holes in the spout, the water would only drain out of the bottom part, and it made a really fat stream of water that kind of splattered and dribbled everywhere. And it leaked from I’m not sure where, any time there was water in it. So I decided instead of discarding it, I would use it as a flower pot in my garden.

Other things I would put in this category include old rain boots you don’t wear anymore, tin cans, tea pots, basically any kind of cute old thing you can think of that can hold some soil. This is one category where you definitely want to to drill holes at the bottom for drainage if you can, or at the very least, put some rocks underneath the soil.

I kind of put this in its own category ’cause it’s so specific. Normally, I would be using the bird bath as, you know, a bird bath (revolutionary, I know), but as I started cleaning up the backyard this spring, I noticed there was a crack in it!

When I filled the bird bath with water, sure enough, it all leaked out fairly easily. I had toyed with the idea of using some E6000 to fix the crack, but I’m not sure if it would be toxic to birds or not. I decided not to risk it. And a leaky bird bath is actually perfect if you want it to be a planter! So I decided to fill’er up with soil and I put some nasturtiums in it, hoping for a lush, cascading effect.

I think part of what this pandemic has taught me is that with a little creativity and flexibility, you can achieve a lot with what you already have. I didn’t need to go out and buy more stuff at the gardening centre to make all these wonderful floral displays. If it were like any other spring, I wouldn’t have given it another thought and just come home with more stuff. But things I would’ve normally thought of as broken or useless, or just not right for my very specific idea, now have a second life.

This is a complete side note, but I’ve even noticed that we don’t have as much recycling or garbage to put outside every week since the stay-at-home order came into effect. And we aren’t dying or starving or bored to death! It really makes me wonder what we were consuming so much of that we were creating so much waste. I don’t even know!

So this summer when you go to create your porch displays or balcony gardens, I encourage you to have a look around at what you already have around your home, and you might just realize that you can create a cute as hell flower garden with things you already have!