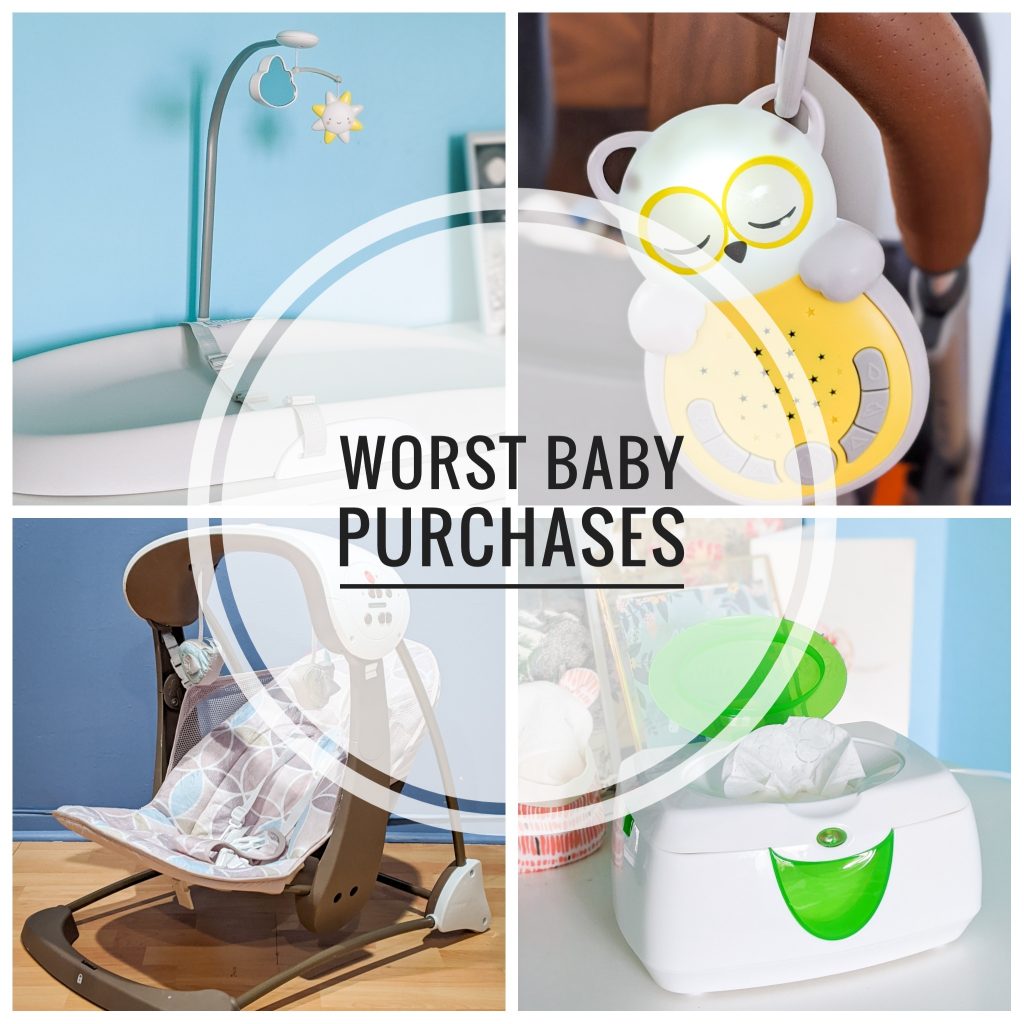 As promised, here is part two of my “baby purchases” post! It is much shorter than my “best purchases” post because thankfully, we didn’t get that much stuff that I really regret getting.

I think it helps that I hate clutter so I’m pretty picky about what kind of things we get for Theo. And we don’t exactly have a huge house, so we have to be smart about the stuff we do get. There’s really not a whole lot of stuff a baby needs, at least for a little while. They just need a safe place to sleep, something to catch their poo and pee, some clothes, and a way for you to transport them around safely and comfortably.

So without further ado, here are a few baby things I would maybe pass on if I could do it all again!

Although there is nothing wrong with the Skip Hop Nursery Style Wipe Clean Changing Pad, I kind of regret getting a fancy changing pad, simply because it’s not really worth the cost. I thought the extra features would be super useful, but I think we could take them or leave them.

The mobile is nice and Theo does like looking at it or grabbing it sometimes, but he doesn’t really need the distraction while his diaper’s getting changed. He’s more interested in the tag on the side of the pad! The security belt is nice, but other, cheaper, changing pads also have belts. Or you could just put the baby on the floor to change them, so you wouldn’t even need a belt. The rubbery/silicone-y material is also nice and super easy to clean up, but you could easily just put a waterproof pad between the baby and the mat to catch any mess.

To be honest, a $20 changing pad, or even just some towels on the floor, would work just as well. I don’t feel so bad about this purchase because we had a gift card and only ended up spending about $25 for our fancy Skip Hop changing pad, but if I had to do it again, I’d just go with a cheaper one.

I got this Fisher Price Deluxe Take-Along Swing & Seat in order to be prepared for a difficult baby who always needed to be held or rocked. I imagined my arms would get tired or I’d just need a break and I didn’t want to be stuck with no options. But before you shell out the big bucks for an automatic swing or rocker, I would try to borrow one from a friend or relative first to see how your baby responds to it, or if they even need it at all.

Not only did Theo fall asleep anywhere very easily when he was a newborn, he hardly ever cried and certainly did not need the extra comfort of being rocked or held all the time. We didn’t use it at all until around the age of around 2 months when Theo started going through his “witching hour” phase, when he basically just cried on and off from about 5:00 pm until 11:00 pm.

During this phase, we used the swing a few dozen times so our hands could be free to eat dinner, or to try and soothe him a bit before being put down for a nap, but it wasn’t like it was some fool-proof, magical weapon that stopped his crying. It worked sometimes and didn’t work other times.

Also, this specific swing leaves much to be desired in terms of quality. I don’t find the “6 swing speeds” to be very different, and it takes a little while for it to get up to speed. And if you disturb the swinging motion at all, it’s like the mechanism gets confused, slows down, and takes a while to get back into the correct speed and rhythm.

I’ve put him in the swing a few times since he grew out of his witching hour phase, just to give him a bit of a change of scenery or change of activity. So it wasn’t like it was a totally useless purchase. Any kind of device that allows your baby to be a little more upright before they are able to sit on their own can be useful, if only to give your arms a break, and give the baby a change of scenery/perspective. But at around 6 months or so, babies tend to get much more interested in being able to move around on their own, even if they aren’t quite ready for it yet, so any kind of device that keeps them strapped in tightly won’t be as interesting to them. They might even start to hate it.

If you have a particularly sensitive newborn who really likes being rocked, you may feel differently. I know there are a lot of parents who swear by devices like this. But for us, it definitely was not worth the cost.

I got this little portable sound machine, the Cloud B Sweet Dreamz Owl Soother, which I thought would help Theo nap on the go, but I actually think it was kind of a waste of money. Not that it was expensive, but even little purchases add up if you don’t end up using them. I’m not even sure we successfully used this thing once.

First of all, the speaker is terrible. If you’re out and about, you won’t even be able to hear any of the songs or the sound effects, unless you put the thing right by your baby’s ears, which you probably shouldn’t do.

And then, the way the sound machine works is, you turn it on, and the head lights up as a little night light and either a song or a sound effect will play on the speaker. If you press the button again, the light will flash on and off, and sound will play. If you press it again, the sound will turn off, but the nightlight will remain on. I found this to be a really dumb system if you’re trying to use this on the go to help your baby sleep. If you tried to keep the machine inside of the stroller so the baby could potentially hear the sound, the light will stimulate them and keep them awake!

Now, if you use this thing at home, like on their crib, maybe it’s a different story. Maybe your child is afraid of the dark or needs some music to be soothed to sleep. Since it’s quieter at home than out on the street, maybe the sound would be adequate if you clip it onto the baby’s crib, I don’t know.

All I know is, I bought this to be an on-the-go aid in getting Theo to sleep in his stroller and it’s completely useless for that. Maybe there exists a similar item that’s more expensive or better quality, and thus works as intended, but I think I regret getting this thing.*

*Full disclosure, right before publishing this, I think I may have discovered a way to use this that might make it useful after all! I managed to use it a couple of times outside of the house (at someone’s apartment and at the mall) to MAYBE help Theo fall asleep in his stroller, without us having to walk him around outside.

I put a blackout cover on the stroller, then set the sound machine to the rain setting, and clipped it to the outside of the stroller with the speaker facing towards the stroller. If you can clip it close or onto the stroller hood, I think it kind of echos into the stroller so they can hear it better. Also it helps if you’re indoors.

He’s been able to fall asleep a couple of times this way, but I haven’t tested it enough to know for sure it’s not a coincidence. Also, I’m not sure if it’s the blackout cover that helps the most or what, since we do keep his room at home very dark.

But there may be hope for this thing yet!

From birth up until about 2 or 3 months, Theo hated getting his diaper changed more than anything. Even though he was always a super chill baby (seriously nothing bothered him), the second you took his diaper off, he’d scream bloody murder.

We thought he didn’t like feeling the cold, wet wipes on his butt, so we got a Munchkin Warm Glow Wipe Warmer in an attempt to get him to stop crying every time we changed his diaper. But it really didn’t seem to make a difference. He still cried most of the time, until around the age of 2 or 3 months, and then he just magically got over it one day.

On the one hand, it’s comforting to know that babies (and kids of all ages, I imagine) go through so many phases, and it’s just a matter of waiting them out. Whatever they are going through, they will probably just get over it one day, without you having to do anything! On the other hand, we ended up getting a thing that not only didn’t really help with the crying, but the heat actually ends up drying out all the wipes.

We ended up unplugging it, so it doesn’t heat up anymore. It does work fine as just a wipe holder, so it wasn’t a total waste of money. But if your baby is going through the same thing, it might just be a phase that will end soon, and a wipe heater may not be worth it for you.

All in all, there haven’t been too many huge baby purchase regrets. It helps that we definitely tried to keep the baby purchases to a minimum and I try to do a lot of research before I go spending money on really specific items that may only last a few years (or not even).

And we did actually use every single baby item we purchased, although not always for its intended purpose. Baby stuff can be really overwhelming to navigate, so I hope my little two-part series helped you out if you were having trouble deciding if something was worth it or not!

Did a lil bit of haulin' during the recent Sephora

Went up the mountain today ⛰️ We haven't been

I'm really craving some colour on this gloomy Frid

Nothing like a pastel half rainbow to brighten up

New blog post is up! I installed some decorative m

I took out the dried statice wreath I made last fa