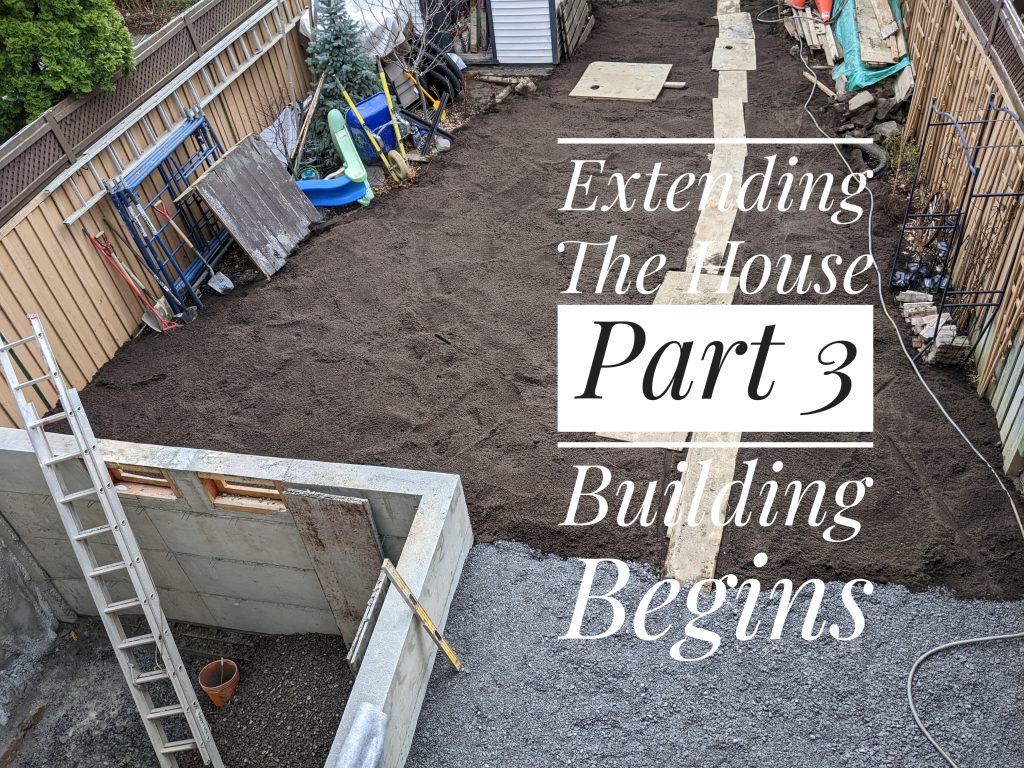 It’s been an eventful month or so around here! After all the demo happened and the backyard became an impassible mess, it was time to start the rebuilding process…

Our contractor started with building the forms for our new foundation footings. This seemed like a pretty straightforward process. Fairly fast and easy, but the tricky part of this whole endeavour is actually how small our backyard is.

It wouldn’t be very feasible to get a cement mixer back there, so our contractor ended up having to get a second truck with a pump that then routed the cement through a hose down to the forms while the cement mixer stayed in the parking lot in the back.

The footprint of our extension is fairly small, no more than 200 square feet, so the whole cement pouring process only took about 15-20 minutes! But it’s just a lot of coordination and logistics when you can’t get the trucks on site easily.

I’ve obviously never seen any of this type of work being done before, so it’s all been very interesting to watch up close!

After the footings were done, a French drain and sump pump were installed, and our contractor wanted to start with some of the major plumbing work on the interior. They took out some of the flooring in the basement and started drilling away the concrete subfloor, but then realized it wasn’t feasible to move the pipes as far down as they wanted.

It was then decided that it would be better to tackle all of the plumbing changes all at once, later on in the process, rather than trying to do anything about it right now. So our contractor fixed up the floor and got to work making the forms for the new foundation walls.

This is where we hit the first little bit of snag in the process.

We needed three new foundation walls and after the wall forms were built, the cement truck came back with the pump truck.

It was all going well until one of the form walls collapsed. You can kind of see below, a part of the plywood up against our neighbour’s building broke away.

Our contractor decided to close off the other two parts of the wall and get the concrete poured just on the outside walls for now and finish the rest of the wall at a later date.

I knew it was too good to be true when construction started a week ahead of schedule! Nevertheless, snags will happen and issues will come up whenever you do renovations, so you kind of just have to roll with the punches.

After the two poured walls were set, they removed the forms, and installed a French drain and a waterproof membrane all along the back side of the house.

Despite the mishap, things were looking good!

Filling In The Backyard

It was finally time for backfilling the yard, honestly my favourite part of the process so far! Can you guess why?

We requested a high quality dirt with compost for the final layer and it looks just beautiful! Not only that, but it is completely free of debris, the softest dirt I’ve ever worked with! It’s a true pleasure to just kneel and sit in, because yes, despite being over 7 months pregnant, I’ve been out there almost every day, getting garden stuff done. When else am I gonna do it?! But in all honestly, I would keep gardening right up until I go into labour if I could. Maybe I will!

Now that 2/3 of the foundation is in, things are progressing even quicker. The framing has begun and the last cement pour will happen very soon. Hopefully, the windows will be in by the end of the month and interior finishing can be started in June! I’m so excited!