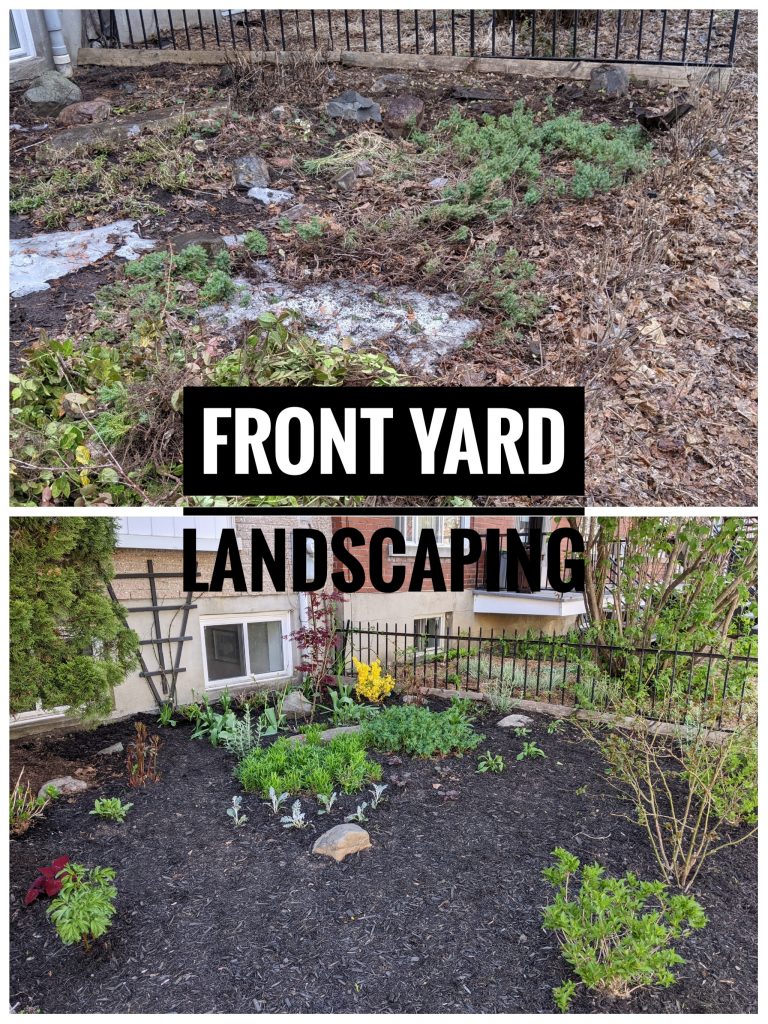 When we last left off with the front yard transformation, I had begun removing some of the original plants that were in the front yard and transplanting some roses from the backyard to the front (you can read more about it here).

After a bit of a break, I finished transplanting the rest of the plants from the backyard that needed to get moved due to the future work we will be doing on the house. I moved the last climbing rose from the back to the trellis on the front of the house.

I, then, went to work transplanting the huge OSO Easy Double Red rose bush, which is four years old and at least 4 feet high and wide. I had quite a time trying to dig this thing out. I couldn’t get a very big root ball in the end, but the bush seems to be doing fine, so I am hopeful she’ll be okay.

Since there was now a huge open space in the very front of the yard where the old hedges were, I planted this bush right in the middle.

I also transplanted the two young weigelas I planted in the backyard last fall to either side of this giant rose bush.

And finally, the last thing I had to move was a smaller rose bush (I don’t actually know what kind of rose it is) and I just plopped it down near the cedar tree.

After living with this for a little while, I realized that this was a bad spot for it. My clothes kept getting caught on the thorns, as it is kind of in the main walkway of the garden bed. I ended up moving it closer to the back, right-hand corner, behind a big landscaping rock.

Now, with everything transplanted from the backyard, I was able to remove all the remaining hedges and ground cover that I didn’t want in the front yard. By the way, does anyone know what this evergreen ground cover is?

The roots and branches were so huge and woody, I had a hard time getting it all out. I had to just gradually cut my way through it with a pruning saw! I don’t think you can tell in this picture, but this piece I cut out was more than half my size. I even had to saw at the roots!

Once that was done, it was time to tackle all of the garden debris. I’m not just talking about cleaning some of the dead off the perennials (which I also did), I’m talking piles of orange cedar needles on the ground, dead leaves, rocks, straight-up garbage….the whole front yard was a mess! When I tell you I’ve always neglected the front yard, I was not kidding. Just look at the difference in how clean and tidy the garden bed looks now that I cleaned it up.

By the end of it, I had probably filled 8 green waste bags (if you’re unfamiliar, a green waste bag holds about 110L/24 gal) and had a pile of rocks that probably weighed around 100 lbs that, thankfully, was able to get picked up by the city.

Isn’t it just so satisfying to look at a newly cleaned garden bed? And I think I realized after removing all the debris and the plants that I didn’t want, the front yard was actually much bigger than I thought.

I actually have a lot of room to add all the plants I could want here! Especially since the two rose bushes will be going back to the backyard once the work is done on the house.

I wasn’t originally planning on mulching the front garden bed, but once I got it cleaned up, I just thought it would look even neater if I just did it. Plus, it’s supposed to help with the weeds and retaining moisture in the soil, so why not? I’m so glad I mulched, I think it looks really good!

And finally, my reward for all this hard manual labour…a trip to the garden centre! Although I wasn’t able to go as plant crazy as I would have liked, I still picked up some nice things for my containers, the vegetable garden, and the newly manicured front garden bed.

I think I’ll do a proper garden tour in another post to have a closer look at everything once more things have started flowering.

It’s been a long month of work, but it’s really paid off! The front garden looks so much better than I could have imagined. It’s still not “finished” yet. For one thing, I have to leave some space for the plants I had ordered last year for the backyard that I will have to keep in the front for at least this season. And there might be a few holes here and there I’ll be filling once I’ve done that.

I kind of can’t believe I just lived with it the way it was for almost five years! I like it so much better now and could have enjoyed it for much longer, had I tackled this project earlier.

But as they say, the best time to plant a tree was 20 years ago. And the second best time is today. So happy gardening everyone!