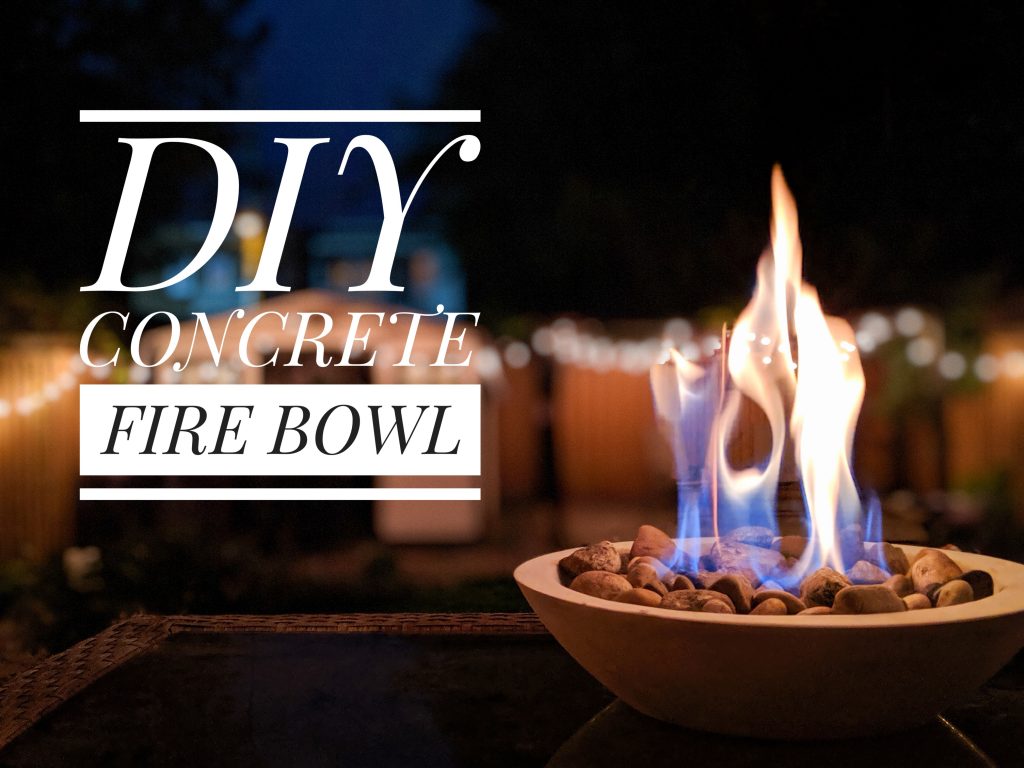 I wouldn’t call myself a pyromaniac, but I love fire. One of the top things on my house wish-list when we were house hunting was a fireplace. Unfortunately, a wood-burning ban came into effect in Montreal not too long ago, so we haven’t actually used our fireplace, but I am not discouraged. Someday, I’m gonna figure out how to get a roaring fire in there, despite the fact that we do not have a gas line running to the house.

I have also developed this obsession with camping which I think can really just be boiled down to a love of campfires. The flickering flames, the crackling, the warmth….wow….guys, am I a pyromanic?

Well, regardless, I have always wanted a fire pit or something similar in the backyard, and since there’s a wood-burning ban, and we don’t have a gas line to the house, I was forced to improvise, and I think it turned out pretty well, actually!

Here’s how I made a cute little concrete fire bowl, perfect for those lazy summer nights outside!

Mix the concrete by following the instructions on the package. I don’t know how necessary this is, but I applied a bit of cooking oil to the inside of the larger of the two bowls and the outside of the smaller of the two bowls. I was hoping this would help the bowl removal process later.

And as always, whenever you’re working with concrete, you might want to wear some protective gear (eye protection, breathing protection, gloves etc.)

Pour the wet concrete into the larger bowl until it’s about halfway full. It’s important not to overfill it! Tap or vibrate the sides of the bowl to get air bubbles out of the concrete.

Also, check the level of the smaller bowl so it doesn’t end up crooked. Unless that’s the look you’re going for!

Once the concrete dries, remove both plastic bowls. I could be wrong, but I think the cooking oil actually helped the outside of the bowl come out extra smooth and almost shiny. I think it looks so good!

After you’re done admiring how nice the bowl looks, sand down the concrete edges so they aren’t too sharp or jagged. I also did a quick pass on the inside of the bowl too, just ’cause.

4. Make a grate to go above the fuel

Place an aluminum tin or tray into the bowl to hold the gel fuel. Cut out some chicken wire so that it can rest about halfway down the bowl, above the tray. Depending on how sharp the wire is where you cut it, you might want to fold down the sharp edges, just so it’s a bit safer to handle later.

5. Fill the tray with fuel

Fill the tin with gel fuel. You could just light the fuel directly in the can it comes in, but I really wanted the feeling of a larger fire and figured more fuel surface area means better flames.

6. Cover the grate with rocks

Place some decorative stones/rocks on top of the chicken wire to hide the wire and the tray at the bottom.

And there you have it! A super simple, easy way to enjoy the summer evenings with a roaring fire.

Today from the garden: the usual zinnias, statice,

I've been living in this paper gardening hat all s

I've been thinking a lot about how fast time is go

Another close up look at my shimmery creamsicle-es

The dahlias and zinnias have been going crazy in t

One good thing about having to wear masks is that

Today from the garden: my biggest bouquet yet! Blu

New blog post is up! You can keep your hiking boot